Conservatives: Club was not a drinking den

Published on the 09 May 2014  http://www.thescarboroughnews.co.uk/what-s-on/conservatives-club-was-not...

Myself and my colleagues read with dismay the comments attributed to Robert Goodwill regarding his description of the Conservative Club being a “drinking den” in its latter days (The Scarborough News, April 24).

As members of the committee, we battled hard along with our other committee members to keep the club going against the odds and financial climate.

The club’s demise was down to several factors, the general decline in pubs and clubs, the ill-advised and thought out smoking ban, and the location of the club itself, as Huntriss Row on a night worried a lot of our older members who were loath to walk along the street after dark.

Although Mr Goodwill was the president of Scarborough Conservative Club, this was a position held by the sitting MP, or parliamentary candidate whose task was to chair the AGM, and little else.

Mr Goodwill did get involved a few years previously when he realised that the chairman of the time had taken the club perilously close to bankruptcy and wrote to him asking for his resignation, and an emergency committee (of which I was part) was formed, and we managed to save the club and continue for a few more years.

When I first joined the committee many years ago, our MP was Sir Michael Shaw who regularly dropped into the bar for a drink with the members, as did his successor John Sykes. This was always appreciated by the membership, but Robert Goodwill NEVER came into the club to meet the members, so how he can describe the club as a drinking den which to many people draws a picture of a seedy dive, frequented by people of questionable reputation whose sole intent was to consume vast quantities of alcohol.

When I was chairman of the club, I pointed out to Mr Goodwill that our members would like to see him from time to time in the club, he said he came into the club on a regular basis to speak to members, I pointed out that the only time he came in was when he was coming and going to his office, and if he met a member, it was in the corridor.

He also said that he didn’t consume alcohol which I countered that we did serve soft drinks plus coffee and tea, but the upshot was that he just didn’t see the need to meet the membership, so how he can call the club a drinking den is both inaccurate, and a slur on the members of Scarborough Conservative Club.

A General Election is coming up, and Mr Goodwill will need all the votes he can get, and comments of this nature will hardly help his cause among the people he is hoping will return him to Westminster for a further term. 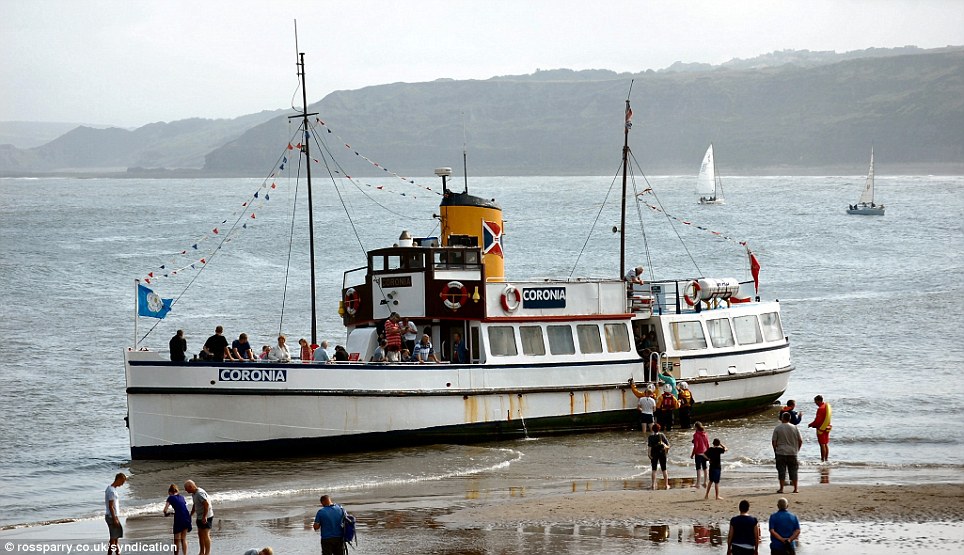 (Aha, but it was a drinking den, with a subsidised bar and snooker to boot!)

Never mind, perhaps Bob should rent his boat out to the Conservative Club, that has a nice little bar too. Now how far out is the free zone, 12 miles? And salvage rules for booty washed up on shore?

todays Cabinet Meeting agreed to accept £ 50,000 of funding from the Environment Agency to investigate and appraise a sea defence scheme  http://www.whitbygazette.co.uk/news/local/lives-at-risk-if-bay-sea-defen... "The council’s cabinet member for coast and flood protection is Councillor Mike Cockerill and he said the overall cost of any scheme would be around £993,000."

Posted on May 5th, 2014 with tags Crown, energy, Estate, europe, Global, MORL, ... UK seabed and supports offshore wind with a £100 million investment in a range ... an agreement with The Crown Estate, to facilitate work at the Energy Park .

I guess you can't please all the people all of the time ... it would seem the fishing industry is not too keen on the Dogger Bank Windfarm Development ;

"Theresa May is facing calls to rethink the “discriminatory” new earnings threshold of £35,000 for non-EU migrants that could starve Britain of vital talent in the teaching, charity and entrepreneur sectors when the changes take effect in April.

Overseas workers who have lived in the UK for five years will have to prove they will be paid the new minimum threshold in order to stay in the country.

Those who fail to demonstrate earnings of more than £35,000 will be denied settlement in the UK and will face deportation according to the new Home Office policy."

However: "Discrimination based on income fails to take talent and new sectors like tech start-ups, whose staff might be paid less than £35,000, are essential to keeping the UK at the forefront of the global economy.”

Is this to be the new living wage? Basic Income?

Wholesale gas prices have been volatile following news that the UK's largest gas storage facility is being shut down for 42 days.

Gas prices for the coming winter surged more than 8% on Wednesday after Centrica Storage said its Rough facility would close until 3 August.

The plant accounts for 72% of the country's gas storage capacity, but has been affected by safety issues.

The move could push the UK's gas stocks to record lows this winter."

The people have voted.

great comment:  "Do you know why the pound plummeted? It's because all those big money boys manipulating and controlling the politicians, with guys like Cameron in their back pocket, realized they just lost , and so are dumping Britain and looking for the next government to control."

Must be one of those desk top studies...

Yep, lets go the whole hog and install Farage as PM asap and we can all take a long holiday whilst the lunatics run the assylum.

Mind, I don't spose many can do that without getting paid...

Independence? Ha you don't know the meaning of the word...

Anyhoos I is sooocch a bad loser... Grrrrrr.

Oooh I feel a Zorro moment ...

The Barbed continue to paint a portrait of the UK/EU as a 'divorce' ....

Was there a EU demographic on messy business?

Rather amusingly some fervent Independence campaigners and seekers seem to have a problem disconnecting  their umblical cords.

Boris patronising the UK.  (Must have had a domestic).

"My worry isn't the future of the U.K., the EU or the US. It's the shift in the Overton window caused by the likes of Farage and Trump, and the widespread acceptance of their xenophobic hatred."

"I am deeply saddened at the result, which will reverse forty years of outward-looking, progressive collaboration with our neighbouring countries in the European Union we have built together. This is a dark day for Britain, and one whose painful impact will be felt across the country and abroad.

It has been a difficult fight, and of course we must now respect the decision that has been taken, albeit by the narrowest of margins, and following one of the most dishonest campaigns in political history.

The challenge that faces us is to find a way forward in the light of this decision, which can limit the damage both at home, in a country that is clearly deeply divided, and in our relationship with friends and allies around the world."

Should a vacancy arise by 2020 for a mild,  mannered, articulate intelligent, globally astute political cutie, self confessed bore...

"The former prime minister will take charge of a £750m ($1bn) fund to improve ports, roads and rail networks between China and its trading partners.

It comes after Chancellor Philip Hammond's two-day trip to China.

The Belt and Road Initiative was first unveiled in 2013, but this year China's President Xi Jinping pledged £96bn ($124bn) for the scheme.

The Chinese government said it would invest tens of billions of dollars as part of an ambitious economic plan to rebuild ports, roads and rail networks linking China and its trading partners.

President Xi intends on developing ancient trade routes through China and Europe to make it easier for the world to trade with China.

China hopes that by improving and creating trade links with other countries - by sea and rail - will help boost its economic growth of the Asian superpower, which has slowed in recent years.

A statement from the Treasury also detailed progress on allowing British banks and insurers to access the Asian superpower's bond and insurance markets..."

"Sources say that the company will sold as a bolt-on purchase to a larger construction company.

The AFR says Downer EDI, CIMIC and Lendlease have thrown their hats in the ring for Lucas.

Lucas Engineering and Construction is AJ Lucas’ in-house design and construction arm, with a focus on gas and water pipelines and civil engineering.

The AFR reports that the strategic review and potential sale of the engineering and construction division comes as AJ Lucas explores options to speed up the exploration and development of the shale assets in the United Kingdom."

"You can hide buried treasure or a winning poker hand, but you can't hide the bloom of first love."